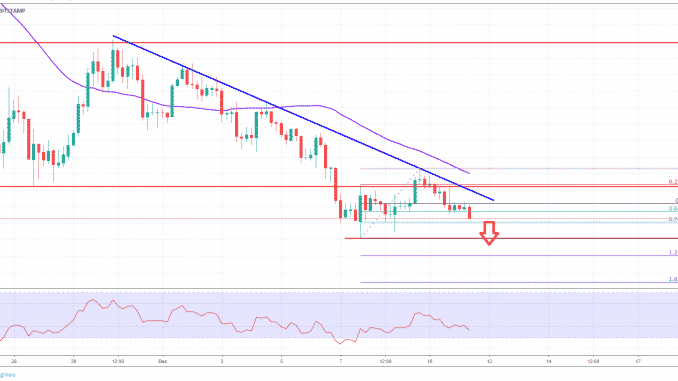 In the night of Friday, December 14, the average rate of bitcoin to the dollar again dropped to its annual low of around $3 280 (according to Coinmarketcap). After weeks of downtrend and inability to break through key resistance levels this last fall is not surprising. Everything indicates that the decline will continue, up to $3 000.

During intraday trading BTC has lost 5% with $3 450 $3 284. This repeats the annual minimum, which was reached nearly a week ago, 8 Dec. On Monday, bitcoin briefly touched $3 680, but has since gradually decreased, reaching bottom a few hours ago, before slightly recovering. At the time of writing BTC is trading just over $3 320, where probably will be traded some time before falling further.

Bitcoin has almost fallen twice since then, as last month was trading in the neighborhood of $6 400. Analysts predict a drop to $3 000, which every day becomes more and more likely as further weakening of the markets. Friday was especially painful for cryptocurrencies in the past few weeks. Last Friday there was a falling market at $15 billion to the new year low the previous Friday was not much better.

The total market capitalization of cryptocurrency at the moment has not reached a new low, but very close to it. With the level slightly above $105 billion, at the time of writing, the total capitalization of not so far away from the minimum and at weekends could fall below the psychological barrier of $ 100 billion.

In the near future there will be catalysts to change this trend, cryptologist hoping for such heavyweights as Bakkt and Fidelity. It seems that the game still exist only hardcore Hodler and whales, zakupivshaya cryptocurrency many years ago.

Those who did your research and really understand what they are investing, will weather the storm. A further fall is unlikely bitcoin will be so much disturbing people who are here in the long run, and then panic selling will fade away.

Germany can legalize cryptocurrencies with signs of securities