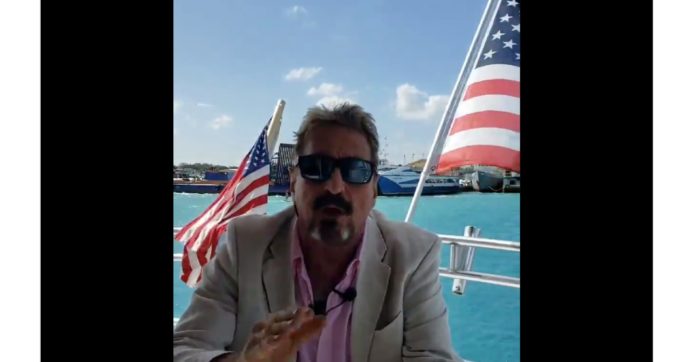 One of the pioneers of antivirus and is known to cryptoanalysis John McAfee said that he was forced to flee from the United States to Venezuela after the IRS accused him of tax evasion.

In the words of American computer programmer, tax in Tennessee, and accused him of “the use of cryptocurrencies in crime” (tax evasion). “Warms up” the incident and the fact that John McAfee is running for President of the United States. Similar charges were brought against four members of his presidential campaign and his wife Janice McAfee.

However, the programmer does not deny his guilt.

“I haven’t paid taxes for eight years and have never made any secret of it,” explains McAfee.

He claims that despite a government attempt “to silence him” he will continue to conduct his campaign “on Board this yacht” (the yacht on which he fled from the States).

“I won’t let them put themselves in jail. Why do they want to do it? I’m a danger to them (the authorities). We – the cryptocurrency community – at war with the state and the government, and I have been at the forefront of this war,” added the developer.

Judging by some comments McAfee is the photo taken from the ship, his yacht, the “liberty Ship” sailing across the Atlantic to Venezuela, but he is silent on this matter, only saying that he intends to stay on the ship for two years. According to him, he expects that he will have enough fuel as the main source of food is fish. Perhaps the last remark was a joke, but, overall, the situation is very serious – according to us law, the charges against McAfee and his family, threatened them with years of prison time.

Has the bull market returned to cryptocurrencies?