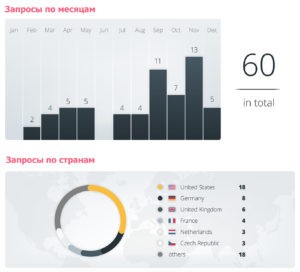 The report Shapeshift stated that typically they receive requests from law enforcement data, including crypto-addresses (or Shapeshift out of it), transaction IDs, identification information (names, emails, IP addresses), cryptocurrency, and other information about crypto-assets. ShapeShift emphasizes that in most cases it is not informed about details of the investigation or research for which you’re requesting data.

The report shows that the Shapeshift received a total of 44 requests for summons in the 3rd and 4th quarters of 2018. The increase was 175 %, compared to 16 in number, for the previous two quarters.

From the point of view of geographical jurisdiction the largest number of queries during the year received from agencies of the United States, they account for 18 of the 60 queries. Among them, 6 FBI, 5 SEC, 3 from the state level, 2 from the Department of homeland security (DHS) and 1 from the Commission on trade in commodities and futures (CFTC).

The German Agency has made the second place — 8 requests, followed by the UK with 6 and France with 4.