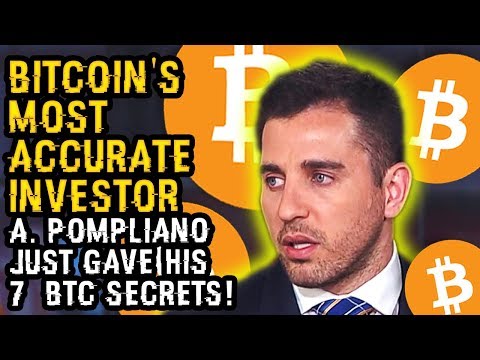 Anthony Pompliano, an American investor and co-founder of Morgan Creek Digital Assets, said that bitcoin will be in the portfolio of each institutional investor.

In an interview with CNBC, Pompliano noted that over time, an increasingly massive infrastructure is being created around bitcoin and the entire cryptocurrency market.

Arguing in favor of Bitcoin's growth prospects, Pompliano highlighted recent events, for example, a record level of bitcoin network hash rate, which indicates a continuous improvement in the level of security and network support.

He also emphasized the recent regulatory approval of the much-anticipated platform for working with bitcoin futures with the possibility of physical delivery from the Intercontinental Exchange.

In light of all this, Pompliano stated:

“The more infrastructure is created, the greater the likelihood that it will never disappear. Now we are at the point where the fate of Bitcoin is being decided – whether it will remain forever or disappear. But I believe that ultimately he will be in the portfolio of each institutional investor. ”

CNBC host Joe Kernen doubted the optimistic outlook and Pompliano presented several factors that could temporarily lower the price of an asset in the short term.

These include excessive regulation, which may initially scare off investors, as well as a relatively small percentage of the world's population that owns bitcoins. In addition, the asset remains relatively difficult to purchase and it is necessary to overcome this barrier in order for the coin to realize its true potential.