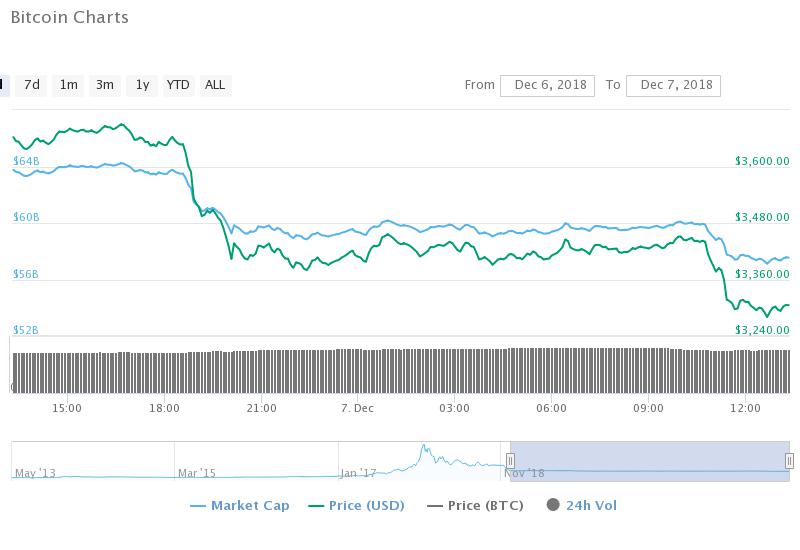 Yesterday, December 6, the Commission on securities and exchange Commission (SEC) took advantage of the last possibility of a delay in the consideration of the launch of the exchange traded Fund (ETF) designed by VanEck in conjunction with the BZX Exchange and the Cboe SolidX. Now its the decision of the American regulator will certainly declare until February 27, 2019. Meanwhile, most altcoins have fallen by 15-20%.

“The Commission considers it appropriate to extend the procedure to allow sufficient time for a decision on whether the application is accepted or rejected… the deadline by which it must be an appropriate decision — 27 February”, — is told in statement SEC.

As of 9:00 GMT the cryptocurrency market is falling rapidly. The rate of bitcoin has fallen by 10% updating the annual minimum in the neighborhood of $3 429, EOS fell 20% to $1.75, and Ethereum (ETH) and Stellar (XLM) lost in price on 16%. Against this background stands out a fork of Bitcoin SV, which is contrary to the trend not only did not fall in price, but continued to rise to $104, showing a growth of 16%, while his main competitor, ABC Bitcoin (Bitcoin to Cash) rapidly depreciates to $114, losing in the last 24 hours 9%.

Application VanEck was issued on 20 June. On 7 August, the SEC announced that it would continue to consider her because she wasn’t ready to make a decision at that moment, and on 21 September urged the public to give comments about it.

“As of 6 December 2018, the Commission received more than 1,600 comments,” reports the controller.

Added fuel to the fire and the Chairperson of the Commission, Jay Clayton, sharing with the press personal opinions about what the reality of today’s approval, the bitcoin ETF is impossible due to market manipulation.

Now until the end of February, the Commission shall either approve the ETF, or completely to refuse its registration. Theoretically, the company filed a request, is still entitled to appeal, however, the Winklevoss brothers, for example, application of this right does not help.

EOS, XLM, ADA. Technical analysis and forecast of the course for 8 and 9 December 2018