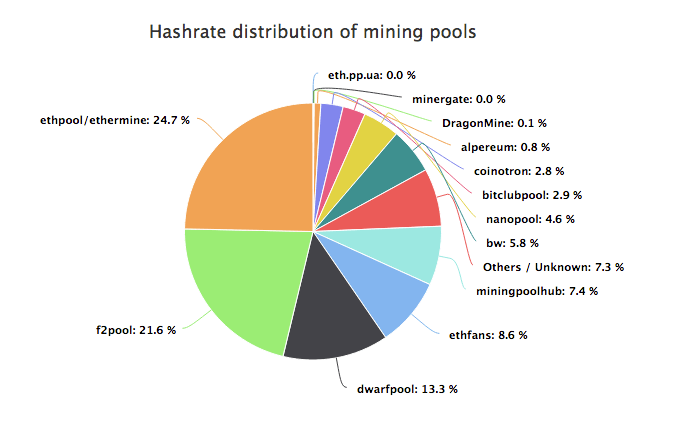 Control over popular cryptocurrency Dash is under the control of pool NiceHash, which generates 70% of the network hash rate yet. And all anything, after all, power NiceHash rented and, theoretically, the 70% can see can be distributed among many miners. But there is one “but” — 53% of coins produced miner one, and so at any time, the blockchain may be subject to “attack 51%”.

This information was shared by a Reddit user with the nickname U/Flenst, who conducted the study browser blocks the Dash and recorded the distribution of remuneration in the amount of 26 665 Dash at three locations within six months. He was able to establish and prove the relationship of these wallets with the same owner, but in theory it can control more than 53% Hasrat as possible that he belongs to another purse, which is also associated with the production Aldona.

Concentration Hasrat Dash in the hands of the Czech mining pool NiceHash points to targeted funding – monopolization of production would be impossible without purchasing ASIC equipment, working with the X11 algorithm.

This became possible due to the failure of developers to protect the cryptocurrency hashing algorithm, as did many of their colleagues. It was enough to make hardwork, changing the calculation process to neutralize the ASIC chips.

Instead, the Dash team has started working on protection from attack 51%, which is expressed in sentences DIP7 and DIP8. The essence of future changes of the algorithm of joining blocks, called ChainLocks is to increase consensus validation above 51%.