Unfortunately, cryptospace is flooded with an incredible number of scammers. According to Chainalysis, the scammers in 2018 managed to get their hands on $ 1 billion, most of which was obtained through hacking exchanges. But why go for a complex cyber-hack, if a little social engineering comes up?

On Sunday, January 27, one of the journalists received a message on LinkedIn from Eric Brenton, who currently holds the position of director of partnerships at Binance Labs.

The message contains a proposal to take part in the development of the Binance Labs incubation program, as well as information that, if it is necessary to add a coin to the platform, this journalist can contact him. The following is a first-person text.

“Having worked in this space for quite a long time, I developed a pretty good“ bullshit detector ”. I was pretty sure it was a scam. But I get pleasure from exposing the scammers, so I decided to enter the dialogue. So, we wrote off in the Telegram and phoned on January 28.

The man who calls himself "Eric S. Brenton" and whose location is the "Big Atlantic Zone", accidentally spoke with a very bright accent from Central and Eastern Europe … He said that Binance Labs is looking for new tokens and companies for cooperation. I told him that this was great news and asked him to write an e-mail (I was curious to see how sophisticated the scam was, I heard stories that scammers sent emails from official Binance email accounts). He agreed to do this, but despite the fact that I reminded him several times, I have yet to receive these documents.

In the meantime, I contacted Flora Sun, director of Binance Labs, and, as expected, my suspicions were confirmed. ” 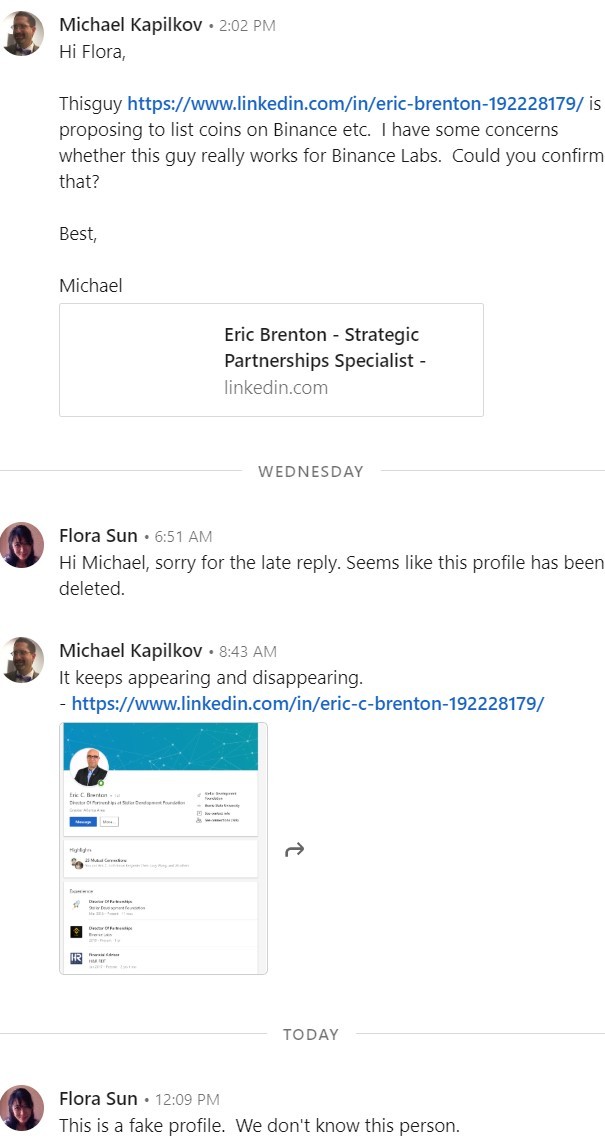 The last message needs no translation. Flora San had no idea who was being discussed.

Fraudsters need to be exposed not only because they are thieves, but also because they are harmful to the industry and its reputation. But only exposing them is not enough; someone must start their pursuit in order for them to end up in prison. Otherwise, their chances of “success” will increase.

If you suspect something is wrong, conduct your own expertise. A company like Binance, one of the leaders in the industry, can become a leader in the fight against fraudsters.