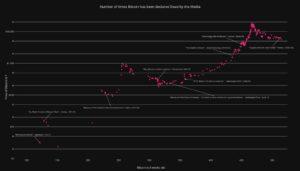 Another collapse of the stock market and bitcoin has caused a new wave “death sentences” from the media, particularly financial media. Their titles speak for themselves.

“Warren Buffett is all this time was right about bitcoin”, the title of an article edition of the Sydney Morning Herald. The Financial Times meanwhile made a video called “Bitcoin: the dying dream”.

It’s not like it all for the next deja vu?

It is not the first time someone announces the “death of bitcoin”. The site Bitcoin Obituaries (Memorial book of bitcoin) every track “the funeral” the main cryptocurrency. The website checks the headers of all articles of the major financial and economic media, and as of 2010 he has recorded in its database 322 news articles about the death of bitcoin, the stock market and cryptocurrency. The first database was recorded article edition Underground Economist titled “Why bitcoin cannot be a currency?”, released in December 2010.

On the website also there is a section of “the Generator of obituaries,” which can help you to choose the title for the next funeral article.

“We need a title for your bitcoin obituary? Click on the “generate”, and we will build for you a unique title from the existing in the database of our website”.

A Reddit user went a step further and used the site database for the scheduling of bitcoin prices, which marked the most famous article is the obituaries.

Nearly every fall after the bullish rally was accompanied by a wave of bitcoin obituaries and materials that bitcoin will never succeed. This cycle continues to repeat itself.

However, the recent collapse of the market without a doubt caused a lot of problems. Many investors out of the 2017 game, and expert predictions about the imminent bullish rally seem absurd, if not irresponsible.

In General, you can understand the “undertakers of bitcoin,” who finally came forward when the bubble bursts in 2017.

Question about climb whether it is the main cryptocurrency ever at the same height or conquer new one, remains open, but once her funeral that regularly organize media and look unconvincing.