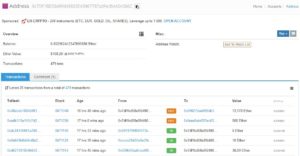 Recently became aware of the fraud by a South Korean cryptostroma who decided to just disappear, at the same time taking thousands of ETH their investors.

This was reported by local reliable source BlockchainROK. According to him, Pure Bit, a startup that intended to launch its own crypto currency exchange, has recently started to pursue presales in its ICO. He was supposed to have ended today, but the day before the end happened was wrong.

Decided to buy tokens startups began to write in social networks that the channels in a startup Kakao (local messenger) were closed. Later, it became known that the startup “fell”. In General, there was a classic deception of investors, and the startup team, “washed away” with 13 thousand in ETH ($2.7 million).

What prompted many investors to invest in this Scam? As reports the edition TheNextWeb, studied the latest zipped copy of the website, the company was planning to launch a PURE — “mining coin” on the basis of Ethereum, the owners of which will receive dividends from the profit of the exchange when it is launched.

Also according to the website, the number of PURE tokens from their owners over time had to increase, in addition to this, their owners were supposed to get a 30% discount on the fees of the exchange. And finally, the company promised to burn 90% of all tokens over the next three years, so she probably wanted to attract the most naive investors.

According to the same source, the last message of the Creator of the Pure Bit in the channel on Kakako said, “I’m sorry”, but even with the pity, he likely will have to answer for stolen 13 thousand ETH in front of defrauded investors and the authorities.

However, the South Korean government is seriously considering lifting the ban on ICO. I wonder how this case will affect their decision on this issue.

A sharp decline in Ether Balances on centralized exchanges

The British regulator may impose a ban on the cryptocurrency derivatives