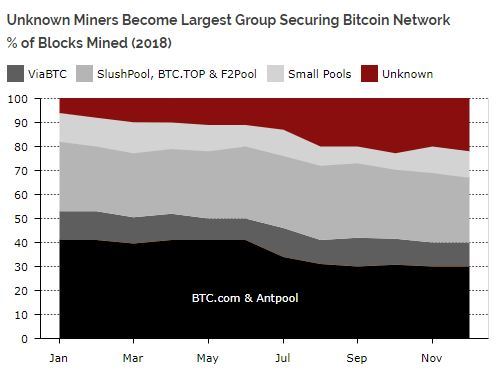 According to the research publication Diar, bitcoin has become less centralized cryptocurrency after the company’s influence began to wane Bitmain the benefit of anonymous miners. And this fact causes concern among experts.

According to available data, anonymous miners closed December, calculating a whopping 22% of the total number of blocks, compared with 6% at the beginning of last year. Today this figure has risen to 23%.

On the one hand — well, that controlled pools BTC.com lost power to bloccano first cryptocurrency (in early 2018 on mining pools Bitmain accounted for 53% of the hash power of the bitcoin network). But experts Diar worried that, although the likelihood of such threats is much lower, the miners are not obligated to share details related to pools in which they can contribute. This means that some (or all) of the “unknown” miners can do to work with one of the larger mining pools.

Analysts also noted that the miners who turned off their equipment, are likely to increase in the price of bitcoin before will resume the validation of the transaction. Last month, when the price of bitcoin briefly jumped from $3 200 to $4,000, the total hash power of the network has increased for the first time since Aug. This indicates a clear correlation between price and number of miners who are willing to participate in the production.

Diar warns that the January growth of Hasrat is unlikely to be sustained, especially if the price will return to the bearish trend. This means that if the price of bitcoin will rise sharply, mining pools controlled by Bitmain, can you get back to work.