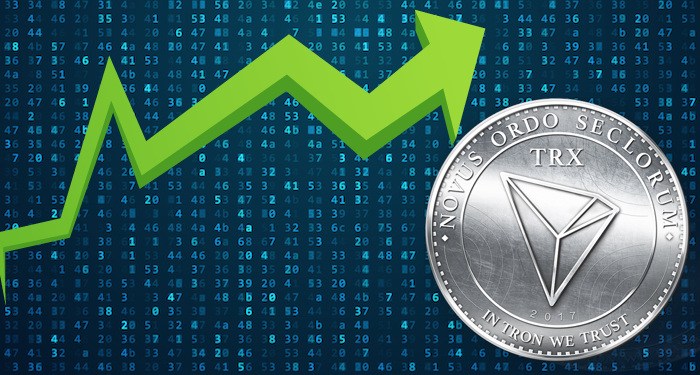 Since December 10, last year, Tron has shown steady growth, doubling in price in the volatile market.

At the moment, Tron is on the 8th place by capitalization, not far from the top-5. Could this be predicted? We are sure that yes, since there were enough indicators that such growth was possible.

It is well known that in the summer of 2018, Tron acquired the most popular torrent tracker in the world – BitTorrent. This has already given the throne some momentum.

A few weeks ago, it was announced that BitTorrent would release its own BTT token on the Tron platform. Given that the number of BitTorrent users exceeded 100 million, the awareness of this fact undoubtedly contributed to the excitement around the project. ICO tokens bought out literally in a few hours on the Binance Launchpad.

After switching to its own platform at the end of June 2018, the number of blockchain transactions on Tron grew steadily. In December, the number of transactions for the first time exceeded 3 million. Since then, this number has not dropped below 2 million transactions per day. According to this indicator, Tron ranks behind the top three (Bitcoin, Ethereum and XRP).

A similar situation is observed with another important indicator of blockchain activity, since the number of Tron accounts has exceeded 1 million, having increased by 600,000 accounts over the past 30 days.

Justin Sun, CEO and Founder of Tron, set a number of ambitious goals for 2019:

Although these goals may seem very ambitious, 2018 was undoubtedly an important year for TRON.

At the moment, Tron is trying hard to solve problems related to its legal status.

On January 10, David Labhart, who will try to resolve Tron’s law in the United States and other jurisdictions, appeared on the team.

The market immediately responded to this information with increasing hype on social networks and a corresponding increase in price by 32%.

Growth can be based on solid fundamental principles. But you do not need to follow every news and be a blockchain specialist to make accurate trading decisions. Although Tron has too many enemies, and their indicators are questionable, the team continues to move in the right direction.

South Korea to Set up Blockchain Based Industrial Park