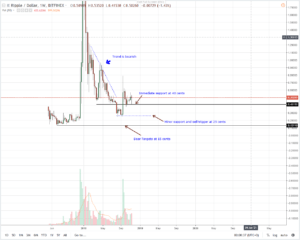 Not to say that Ripple came out unscathed, but support in the neighborhood of $0.4 proved too strong for the bears. According to Rena Neuner (CNBC), traders should reduce the size of their savings in BTC and BCH, for reasons of protection against risks, transferring funds in XRP.

Soon XRP will be supported by a service CoinBase Custody. It is expected that this will be followed by listing on the platform of the exchange. If this really happens, the exchange rate of XRP can go up exponentially.

After Ethereum has lost the title of second largest cryptocurrency with a high probability of the growth rate of XRP started be confirmed by technical indicators, especially after the failed attempt of the bears to break the support of $0.4. Aggressive traders can start to increase the pace with the established footsteps of around $0.45.

While the pair XRP/USD is clearly under the control of the bulls, at least in the short term. Buying is recommended when you set feet at $0.40-0.45, with targets of 60 and 80 cents and then $1.