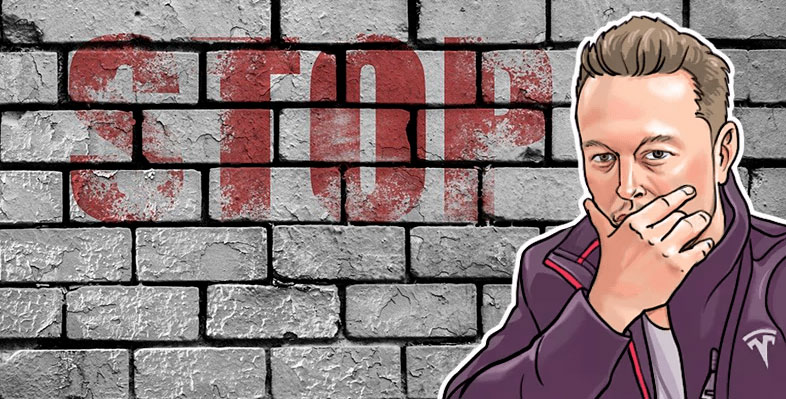 On his social media pages, billionaire Elon Musk has repeatedly endorsed cryptocurrencies. However, he seems divided regarding whether he is actually a supporter, especially after the recent market crash.

Many have appreciated his support for digital assets like Dogecoin and bitcoin. On the other hand, many people have accused him of manipulating the crypto market using his position and his huge following. Some crypto enthusiasts want Elon to stop tweeting about the subject, and focus more on building cars instead. As they are running a somewhat campaign against the CEO of Tesla.

In addition, they have created the cryptocurrency $STOPELON dedicated to stopping the CEO of Tesla and SpaceX. This development comes while the prices of Bitcoin, Dogecoin, and other cryptocurrencies have fallen almost 30% in the last few weeks. According to the group, it is a “community-driven movement to stop the most powerful market manipulator of all time”. The new meme crypto token was valued at $0.0000671220, and currently has a market capitalization of over $34,400.

The group outlined the reasons why it wants Musk to stop tweeting on cryptocurrencies on its website. They wrote, “Anyone with even a shred of critical thinking is aware of his deceit. He has been trying to pump crypto for ages, tweeting about it all day, and got Dogecoin to go up after watching Saturday Night Live. “He is playing with people’s portfolios like candy, like the narcissistic billionaire that he is and always will be.”

The Influence of Elon’s Tweets

Musk has often promoted Dogecoin and other cryptocurrencies by tweeting and speaking about how they might become the future globally used currency. However, the investors did not appreciate his tweets on the energy efficiency of Bitcoin mining and transaction. Mr. Musk even reversed his company’s policy of accepting Bitcoin as a payment method due to climate concerns. Although he believed in cryptocurrencies, he had also tweeted that they couldn’t drive a massive rise in fossil fuel usage, especially coal.

He also mentioned Dogecoin on Saturday Night Live and said it was a hustle. He caused the cryptocurrency to fall by a third after he appeared. He has been primarily blamed for the market collapse, apart from China’s stricter regulations regarding cryptocurrency trading. His actions have now been blamed by investors for causing the market crash. However, it is yet to be seen that how this new meme crypto performs in the future. Also, whether it challenges the supremacy of Elon Musk or not?