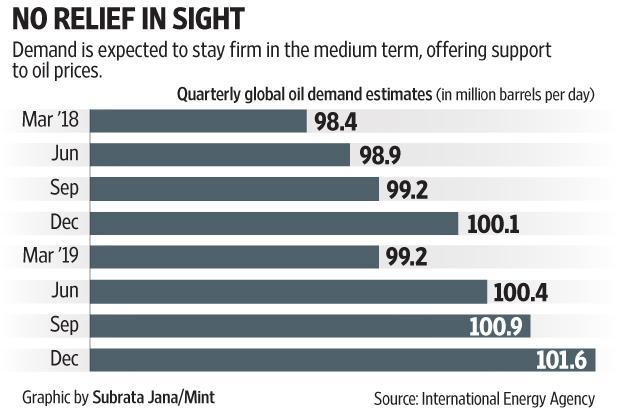 Oil continued to fall amid increasing us stocks and a slowdown in the global economy due to the plans of OPEC to cut production further.

Representatives from UAE, Iraq and Kuwait supported the position of the Saudis about increasing reductions in production in the next 6 months. They will either negotiate, or to neutralize the efforts of American oil producers, which last week opened 10 oil rigs. American production volumes are also growing, they are not going to stop anytime soon.

The UAE energy Minister Samuel al-mazroui, who believed that production cuts of 1.2 million barrels a day would be enough to prevent the oversaturation of the market in the first quarter of the coming year, alluding to the need for further reductions. Investors continue to be skeptical of the organization and its plans for the us-China trade war and the increase in the key rate from the Federal reserve may seriously retard the growth of the world economy. Now oil is 40% cheaper than during the peak in four years, reached in October.

The requirement for more discussion

Al-mazroui suggested OPEC to hold an additional meeting to discuss additional cuts if the current will be small. During the press conference, the energy Ministers of the UAE, Algeria, Iraq and Kuwait assured that the promised reductions will be made, and the country will continue to work together with their partners.

“The main influence on the market last weekend had the intervention of OPEC. However, the market continues to ignore all the loud statement because of the bearish trend”, — said Olivier Jakob, managing Director of Petromatrix GmbH.

Dynamics of prices on futures

The number of oil rigs in the US increased to 883. This year in American fields appeared hundreds of new installations.