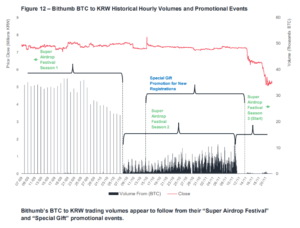 Yesterday morning bitcoin exchange rate has bottomed, leaving traders and investors in doubt about whether bitcoin has found its bottom. Many factors put pressure on the exchange rate of the home cryptocurrency, and one of them, according to analysts from CryptoCompare could be the actions of the South Korean Bithumb crypto currency exchange.

According to the latest report, Bithumb at the average daily volume of trading in October and September was able to beat all of its competitors — they amounted to $1.24 billion. Thus month by month they grew up in a parabola 284%, while such heavyweights as Binance they sank 34%. It is worth noting that earlier Bithumb were found bogus trader who daily cheat $250 million to the trading volumes on the exchange.

“Trading volumes Bithumb grew by 284% from the previous average of the September-October $323 million of This increase came after, as a control package of shares was acquired by the Singapore BK Global Consortium. The new owners decided to hold a series of contests with cash prizes, the festival airdrops and make allowances for a fee to users in Korea.”

Bithumb influence on the rate of BTC

As you know, the positive dynamics of the bitcoin exchange rate has a positive effect on trading volumes and negative changes and Vice versa. However Bithumb it doesn’t work: trading volumes grew, despite a shrinking user base. As stated above, this was achieved at the expense of special offers. All these factors helped the bitcoins some time to stay above $6000 for longer than is necessary.

How were able to understand it? It’s simple: bitcoin exchange rate began to fail immediately after the special offer has ended. The main cryptocurrency began the next fall, and still can’t turn around.

However, Mati Greenspan, senior market analyst at eToro, believes that to blame the South Korean stock exchange for the current situation is not entirely correct:

“If this study is true, then I don’t think you should blame Bithumb for all of this. Exchange through its offerings have stabilized the market and kept him in this state longer than he would have lasted without her.”