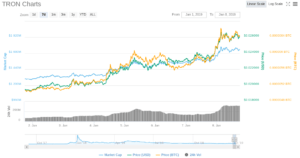 According to Coinmarketcap, the price of Tron jumped 34% this week, including a jump of 10% over the last 24 hours. Last Tuesday TRX cost 0,0187 dollars per coin. Price is $ 0,0262. The rally follows a green week for all cryptocurrencies in General, since the total market capitalization of crypto-currencies has increased by more than 10%.

Tron led the development, which resonates with supporters of developing decentralized Internet, including the announcement of a new token on the basis of the Tron, released Singapore Foundation for the popular BitTorrent peer-to-peer platform to exchange BitTorrent files.

Work on BitTorrent includes the development of ways to integrate with the platform and encouraging its vast user base. Founder and General Director of Tron Justin says that the new token, which is also called BitTorrent (BTT) will be used to encourage people who share files on the platform. Also users of BitTorrent will be able to use tokens to pay for the files or faster download.

CEO Binance Chunpeng Zhao says that the token offer new and interesting test set of the blockchain and cryptography.

The grandfather of Dapp finally finds its currency and decentralized business model. Should be a very interesting case study.

Binance Launchpad, a new platform for entrepreneurs seeking to raise funds through sales of tokens, BTT will make available for non-us accounts.

Since the beginning of the year to network Tron was added 24 more decentralized applications (DApps), including the platform Everdragons, which has just migrated from Ethereum.

Everdragons brings two of his own games, Goldmine and Territory, on the blockchain Tron. Both games showed that their transaction has increased to 14 000 during the first 12 hours after the launch of Tron.

🤩 The feedback has been amazing

How nice to watch a team actually working on your project. If these were the majority, we would have been waiting for new highs.