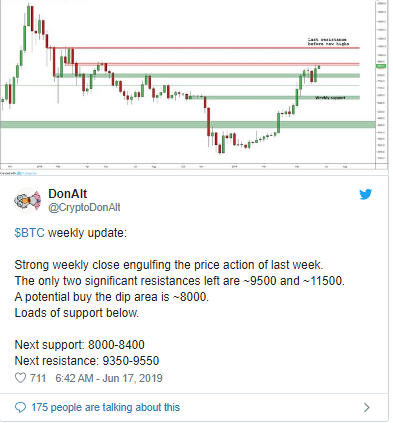 Last night, the bitcoin to dollar rate dipped by almost $ 500 in just 40 minutes. Having broken the psychological mark of $ 10,000, which has already begun to be called a new bottom, Bitcoin continued to moderate in price and at the time of preparation of the material was trading at around $ 9,583 (according to CoinMarketCap).

After the falling bitcoin broke the key support around $ 9,760, most likely, the rate will continue to decline to the nearest support levels of $ 9,500 and $ 9,480. But it is not a fact that the collapse will end at these marks. Such a forecast is made by analyst Aayash Jindal.

The specialist notes that in this situation, the nearest serious resistance is in the region of $ 9,920, which means that it will not be so easy to return to the rate above $ 10,000.

On the other hand, if Bitcoin continues to fall in price and falls below the support of $ 9,500, then the decline may continue up to the support zone in the region of $ 9,200.