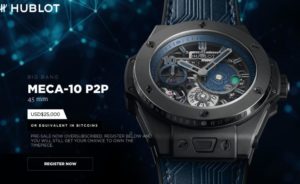 The Swiss watch brand Hublot has opened a pre-order for a limited model of watches from the Big Bang line, developed in honor of the 10th anniversary of the main cryptocurrency.

The new model costs $ 25 thousand, and you can buy it only for Bitcoin. A total of 210 hours will be sold, which symbolizes a Bitcoin emission limit of 21 million.

“The model was developed in an industrial style inspired by the aesthetics of cryptocurrency. We want to perpetuate the memory of the first anniversary of this epochal invention in the field of financial technologies, ”the company’s official announcement says.

Hublot also added that this watch model represents “a fusion of top-class Swiss watches with the latest word in the world of financial technology.”

To promote the new model, the company cooperated with Octagon Strategy Limited (OSL). All watches will be delivered to those who ordered on January 3 of the coming year.

OSL is a digital asset broker who has taken on the task of processing customer data. However, fans of Bitcoin and cryptocurrency, who chose them for the sake of privacy, may not like the pre-order of the watch itself. In order to buy this watch, worth several tens of thousands of dollars, you will need to provide additional information about yourself, namely the full name, address and telephone number. You may also need copies of your passport and proof of residence at the specified address, as is the case with registration on regulated cryptobirds.

Analysis of the rate of Ripple