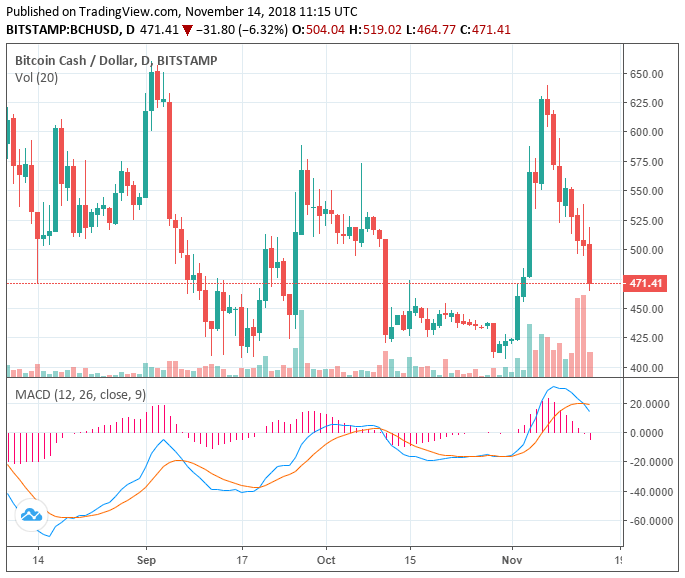 By mid-Thursday after yesterday’s collapse, the cryptocurrency market has stabilized, most of the major cryptocurrencies fell by more than 10%, and the rate of the first crypto currencies were updated at least 2018. Many experts believe cause of collapse today, Bitcoin hardwork Cash and do disappointing forecasts.

The CEO of the company Cription Andrei Lugovoi calls the main reason for panic in the market split the team Bitcoin Cash, which produce two incompatible customer — Bitcoin and Bitcoin ABC SV.

“On Monday there were rumors that a number of the miners want to attack 51% of the Bitcoin network ABC at the moment hard forks, while Hasrat network is low. On Tuesday, the bitcoin network capacity was reduced by 13% — power has flowed for Cash Bitcoin, which is an indirect confirmation of this information. The result — a panic sale.Many traders overlook stabilini to wait out a difficult period,” said Lugovoi.

Analyst social network for investors eToro in Russia and the CIS Mikhail Mashchenko drew attention to the panic among investors caused by hardforum.

“We are seeing a typical cryptocurrency FUD: it took just a couple of hours to the market situation from a completely neutral and boring gave way to panic. Craig Wright, which promotes Bitcoin SV, writes in Twitter about a possible collapse of the bitcoin to 2014, which may occur due to mass transfer of miners in BCH, for which they will have to Fund it in the chops” — says Mashchenko.

He added that the fall in the market capitalization of bitcoin below $100 billion (at the time of publication it is $98,3 billion) will significantly complicate recovery, so in the near future major rebound should be expected: more likely the price will continue to move along fresh lows.

New bottom BTC analysts say the $3 500, but such a reduction is possible only in case if the fall of the first cryptocurrency drop to $5 500. While this turn of events will be a convenient moment to invest in “digital gold”, before the inevitable beginning of the soft turn upward.

The deterioration of relations with the US, China and Russia will worsen the prospects of investment in the classic assets, therefore, investors will again try to part of the savings to divert to the stock market, returning the bullish trend.