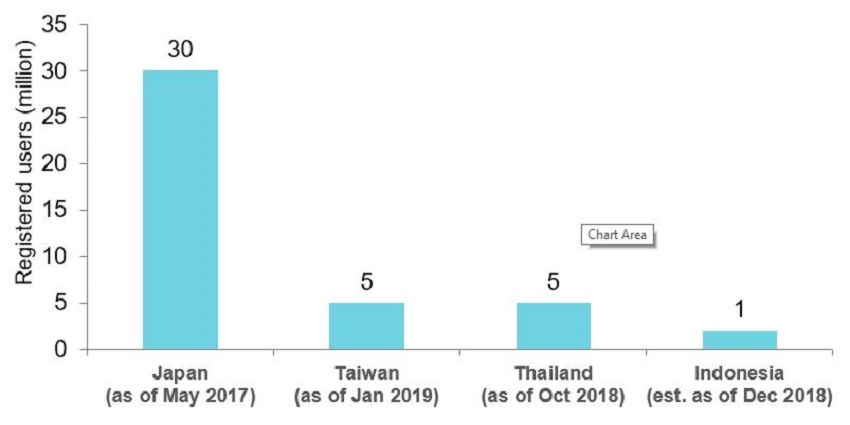 Line, one of the most popular messaging applications in Japan and other Asian countries, is set to expand its business to electronic payments and other FinTech services.

As it turned out, Line, a well-known messaging application in Asia, also plans to use electronic payments and other fintech services. This move is due to the company's desire to avoid any stagnation or complacency that is typical of today's social networking giants.

“My top priority is to ensure that the company is constantly in a position to provide innovation. As many cases in the USA and Europe show, there is a fear that we will become big and sluggish. ”

According to the latest news, Shin will now take a new position in the company, since he was appointed co-CEO. Now, along with Takeshi Idezawa, CEO of Line, he will work on a new company strategy, the main goal of which is to find the best approaches to using the capabilities of fintech, artificial intelligence and blockchain technologies.

Last year, the company disclosed its plans to allocate funds for investment in financial services and artificial intelligence. He also managed to enter into partnerships with Mizuho Financial Group and Nomura.

The Line app is especially popular in Japan. But consumers use this application not only for communication, but also for games, making payments, looking for work and insurance. However, the company still has much to do in order to gain popularity of its main competitors, such as WeChat or WhatsApp, for example.

Line Pay mobile payment service is expected to help increase non-cash payments in the country, since Japan’s plan is to double these figures.

According to company forecasts, its fintech business will become profitable in three years. “There are problems with entering new areas, such as fintech and payments. But if users want this, and this is an area in which we can contribute to improving their lives, we must accept the challenge, even if there are some risks, ”explained Shin.

In addition, Line plans to enter new markets outside of Asia and become a global company. However, Shin stressed that their main fear is that Line will not be able to provide a stable and innovative environment for the best talents. That is why he is considering his role in developing a corporate culture that can remain strong even in the most volatile circumstances.

The new co-CEO also expressed his opinion on the role of Facebook in market competition.

“Given the scale of Facebook and the number of users, there is no mistake in that they represent a serious competitive threat. But we spent years trying to understand the needs of our user base, and I am convinced that we can offer services that satisfy our users even more, ”added Shin.

Social media giants are sent to the cryptosphere

As we have already noted, currently the giants of social networks are actively entering the world of FINTECH. Following Facebook, which also plans to use its own cryptography for using in-payment payments in its application suite, Russia's largest social media player on VKontakte is considering launching its own cryptocurrency and introducing a tip service that will offer users the opportunity to donate tokens to those whose posts they like